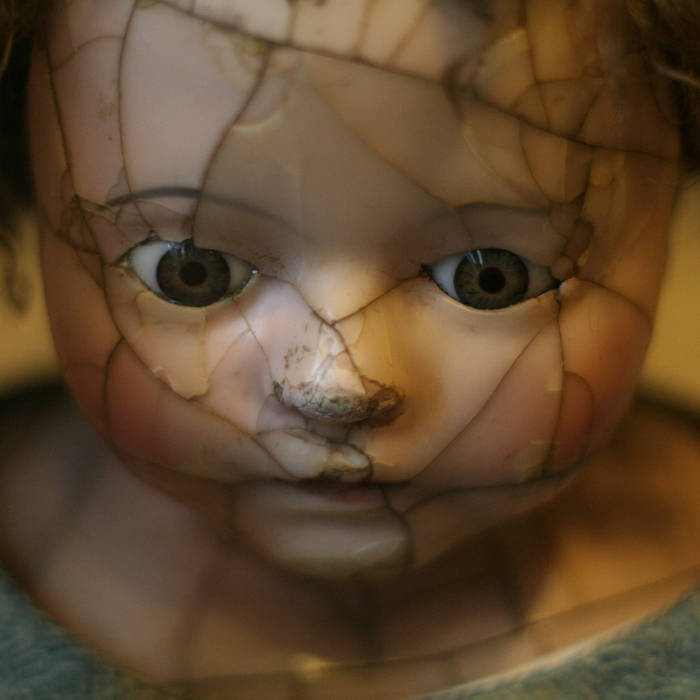 Michael Benoit This is a great piece that was well put together. The melancholy ambiance that carries over the whole room is a great way to float away from the day as the night brings the light to an end. I would have to say there is no favorite track on here because it all flows so well from one to the next it is almost as if it were all one piece. A great gift from a talented artist. Thank you Scott

Paul Asbury Seaman Don’t be put off by the “Bride of Chucky” cover image or the grim subject matter. This is life-affirming music, and one of Lawlor’s most powerful works (a prolific and versatile artist, that’s saying a lot). This is not dark ambient of spooky atmospherics typified by labels like Cryo Chamber. It is a heartfelt grappling with one of life’s darker realities. The two opening tracks, with their organ chords, bells and children laughing in the background set the tone for healing, not anguish. Favorite track: The Regression Room.

This album (almost a year and a half in the making, since the summer of 2018), was inspired by incidents of severe child abuse which there, sadly, is no shortage of accounting of on the internet.

Every parent has moments when frustration overrides a typical response to a stressful situation, particularly in cases of difficulty toilet training and, in particular, when that child arrives at managing this behavior later than what is considered to be the norm.

studies and incident reports show that problems of this type are one of the main catalysts for severe abuse which culminates either in death or permanent disfiguration of a child who does not know any better about what he is doing or not doing right to please his parents.

This album takes the listener into the mind of a teenager who is haunted by the memories of a horrible night when he was severely disfigured after being thrown into a bathtub of scalding water as a result of the unimaginable rage of his father who was subsequently imprisoned for his actions.

Each composition is a sonic snapshot of a moment in time whether past or present and how he copes with the lifelong scars and haunting memories of the horrific events he endured which would ultimately change his life forever.

The pain of memory starts out with the protagonist being pretty carefree as you can hear from the sound of a child laughing in the background, it's a memory of a happier time but the music is a bit haunting and melancholy, foreshadowing what is to come in terms of fragments of trauma remembered throughout.

The regression room is a bit creepy, intended to symbolize a clinical setting of detached professional therapists trying to cure the patient by bringing him back to a much earlier time to deal with the aftermath of the traumatic abuse. I felt a music box sound would engender the association of regression, though it morphs into drones and the sound of children playing but it's as if the environment is being observed secondhand from within the mind of the protagonist.

Boiling Rage is pretty self-explanatory, a flashback to the event which changed his life forever. I took a field recording of my daughter playing and laughing in the bath tub and transformed it into the menacing shrieks you hear throughout the piece.

Bad seed is an intense journey into the mind of the character in the narrative, the unrelenting guilt of what if's, mourning the loss of innocence, continuous self-persecution, feeling that if he had just behaved better, none of this would have happened.
As you probably know about severe abuse, most children who are very young feel they are at fault for the horrible and unjust punishments that befall them.
The relentless cacophony of such patterns of thought entwine themselves in a vicious circle of self-doubt and self-hatred that lead back to an endless loop. I hope I captured the essence of such mental phenomena in this track.

Bleeding Soul is yet another snapshot of mournful regret and abandonment, trust and dependence on his father have been completely obliterated, never to return. Again, I took my daughter's laughter and mutated it into the haunting vocalizations you hear in the piece.

Haunted memories is the final glimpse into the past but from a distance as he has finally begun the slow process of healing, a process which moves along in the final track, Healing Scars, as he has found someone who has also been scarred to bond with, though this other person acts as more of a protector to help him to adjust to his new reality.
"This new release by Scott Lawlor maybe the darkest he has ever manifested, and deals with a subject that as far as I can remember, may have never been done before, to create an album to deal with the emotions, occurrences and feelings from a unique perspective about child abuse.
This seven piece suite starts with the opener The Pain of Memory; the perspective here is deceptive to say the least, we hear a child's laughter while Lawlor performs a gentle, almost childlike energy on the keyboards, but there is a deeper sense within the weave of this offering that needs to be looked into, as hiding in the shadows of this track is something so dark, so terrifying you may just miss it, listen carefully to this piece and feel the intensity and apprehension of what is to come.

This is one of the most impressionist albums I have ever heard from the artist, but he is in a fine creative flow currently. The second labyrinth on the album has been reached, and upon the frame of the doorway is the title marked The Regression Room. Without doubt an eerie sense of foreboding can be found here, one that wouldn't go amiss in a Tim Burton movie. The sterile environment of a mind yet to be bent to a will unknown is laid here brick by brick, and one can feel the child like innocence and a creeping movement of unreality forming all around.


Boiling Rage, a track that is self-explanatory perhaps, here Lawlor brings us a menacing backdrop of ambient tone, it is a kin to a Crow landing upon a carcass seconds before commencing its feeding frenzy, but on the cruel winds of this quite powerful piece, is one of the best performances on keyboards and

synths I have heard from the artist, as he draws us a compelling, a riveting and an utterly alarming musical narrative; the cleverness of a hovering anticipation of utter fear is felt here like never before.
The title track is behind our next dusty door, Bad Seed is before you, imagine being told you were the sum of all evil, a worthless cocoon of skin wrapped around a pointless skeleton, from abuse comes guilt, from guilt comes, the constant reality of bargaining with a higher power, the result of self-blame and laying in the basement of utter self-loathing is a true Bad Seed. Lawlor's talents excel here in manifesting a world free from the one thing we all crave, hope.
We now move to my personal favourite room within this dark dimension, it is entitled The Bleeding Soul; from the energetic refrains of this track, it peeks in through the tattered remnants of my palace of pain, my cathedral of ugly memories. Lawlor's skill at creating a hidden dimension of mournful abandonment is breath-taking, his manifestation of these hallways of despair is literally mind blowing, the organ sound here is one that I love, but one I fear the most, as it is the creator of musical shadows of nothingness.
There is within this realm of mists a way out, a way past the deceptions of pains rich tapestry of lies, a doorway to another reality free from its clutches, and now if we cross this next threshold we will find this very emergence of a possible sanctuary, one that is entitled Haunted Memories. Time is the saviour, and from what was once a razor cut so excruciatingly tender, after a while it becomes part of a tale of past hurts and sufferings, but growing within is a slow, but ever onward intention, a curative essence of recuperation. Lawlor draws us a misty image of the vagueness of hope with his synths, and does it in a way that even the most hardened of us can feel the possibilities of an opportunity to rebuild, slowly begin to grow once more.
The last room to visit before we vacate this land of dark musical mists is entitled Healing Scars; this is a magnificent composition, one that contains a wonderful sense of arrangement, the string like sounds and the choral effects are transcendent and draw a final line in the sand for our protagonist, after all he has survived and finally won the day. The sense of craft here by Lawlor to leave the album like this is well noted, and much respect has to be given.

Bad Seed by Scott Lawlor is without doubt one of the most dark and heart rendering albums I have had to review, it took me back to a few hallowed halls of hell myself, but through music we all heal, through the splendid ability to be creative, this gives us a sense of precious hope, and Scott Lawlor has done just that by producing one of the most poignant albums this year with ease, an album narrated with tone, a dark sense of ambience and an inspired sense of genius that go into illustrating perfectly, the suffering of an innocent, and the eventual long road out of nowhere, an exceptional release indeed."
Review by Steve Sheppard, One World Music Radio

photo by Aimee Vogelsang:
unsplash.com/photos/DbJR10fEteE
Find an alternative version of the Regression room on the following album:
ambientonline.bandcamp.com/album/ambient-online-compilation-volume-9-part-two
review by Jonathan Widran
www.jwvibe.com/single-post/2020/02/26/SCOTT-LAWLOR-Bad-Seed

A jack of all trades, veteran musician Scott Lawlor, composes in different sub-genres such as dark ambient and light ambient, solo piano, cosmic drone and avant-garde, both as a solo artist and as a revered collaborating partner with many other well-established artists in the ambient community. Hence, Scott has built a solid reputation for himself as a cornerstone persona in the ambient community. ... more

Bandcamp Daily  your guide to the world of Bandcamp